Temporomandibular joint pain: a critical role for Trpv4 in the trigeminal ganglion. 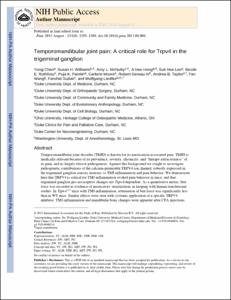 Lazlo Ormandy Professor of Orthopaedic Surgery
This author no longer has a Scholars@Duke profile, so the information shown here reflects their Duke status at the time this item was deposited. Associate Professor in Orthopaedic Surgery
The McNulty Lab is working to develop strategies to prevent osteoarthritis and to promote tissue repair and regeneration following joint injury. In order to accomplish this, we are working in three main areas.  1) We are working to understand the pathways that are activated by normal and injurious mechanical loading of cartilage and meniscus and how these mechanotransduction pathways are altered during aging, injury, and tissue degeneration. A greater understanding of alterations in mech Adjunct Professor in the Department of Orthopaedic Surgery Morris N. Broad Distinguished Professor
My lab studies neural circuit basis of sensory perception. Specifically we are interested in determining neural circuits underlying (1) active touch sensation including tactile processing stream and motor control of touch sensors on the face; (2) pain sensation including both sensory-discriminative and affective aspects of pain; and (3) general anesthesia including the active pain-suppression process. We use a combination of genetic, viral, electrophysiology, and in vivo imaging (in f
More Authors
Alphabetical list of authors with Scholars@Duke profiles.