Short- and long-term rehospitalization and mortality for heart failure in 4 racial/ethnic populations. 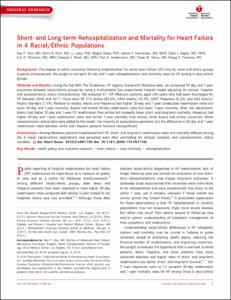 Adjunct Associate Professor in the Department of Medicine
As director of the Duke Heart Failure Same-Day Access Clinic, I am dedicated to improving outcomes for patients with heart failure. This clinic allows patients to see a health care provider quickly, and receive treatments for relief of symptoms. I strive to help patients with heart failure avoid the emergency department and hospital when possible, and live better at home.As director of education IT innovations in the Department of Medicine, I lead efforts in continuing medical educat Fred Cobb, M.D. Distinguished Professor of Medicine
Dr Peterson is the Fred Cobb Distinguished Professor of Medicine in the Division of Cardiology, a DukeMed Scholar, and the Past Executive Director of the Duke Clinical Research Institute (DCRI), Durham, NC, USA. Dr Peterson is the Principal Investigator of the National Institute of Health, Lung and Blood Institute (NHLBI) Spironolactone Initiation Registry Randomized Interventional Trial in Heart Failure With Preserved Ejection Fraction (SPIRRIT) Trial  He is also the Principal I
This author no longer has a Scholars@Duke profile, so the information shown here reflects their Duke status at the time this item was deposited.
Alphabetical list of authors with Scholars@Duke profiles.