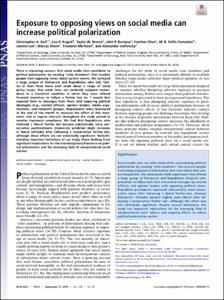 Professor of Sociology
Chris Bail is Professor of Sociology, Public Policy, and Data Science at Duke University, where he directs the Polarization Lab. A leader in the emerging field of computational social science, Bail’s research examines fundamental questions of social psychology, extremism, and political polarization using social media data, bots, and the latest advances in machine learning. Bail is the recipient of Guggenheim and Carnegie Fellowships. His research appears in top journal

Research Assistant, Ph D Student
I am a PhD candidate in the Department of Sociology at Duke University where I explore how computational methods provide a new lens to view longstanding social science debates. When I am not pondering the potential inherent in the wealth of digital trace data, I dabble in experimental and conventional survey methods. Before starting the doctoral program at Duke, I earned a BA from <a href="https://www.fu-berlin.de/en/ind Assistant Professor of Statistical Science
I am interested in theory and methodology for network analysis, causal inference and statistical/computational tradeoffs and in applications in the social sciences. Modern data streams frequently do not follow the traditional paradigms of n independent observations on p quantities of interest. They can include complex dependencies among the observations (e.g. interference in the study of causal effects) or among the quantities of interest (e.g. probabilities of edge formation in a network). My r
Alphabetical list of authors with Scholars@Duke profiles.