Exploring the Role of Mitochondrial Bioenergetics and Metabolism in Heart Failure 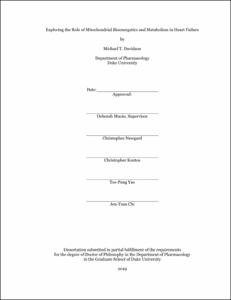 Heart failure is a worldwide public health problem with substantial clinical burden and economic costs. In the progression into failure, the heart undergoes dramatic alterations in mitochondrial fuel metabolism and bioenergetics. As such, there is considerable interest in the delineation of regulatory events involved in the metabolic dysfunction of heart failure. Previous collaborative work identified three metabolic signatures associated with early stage heart failure: 1) accumulation of acylcarnitine metabolites; 2) mitochondrial hyperacetylation; and 3) elevated ketone catabolism. The goal of this dissertation was to explore the role of these metabolic signatures in the pathogenesis of heart failure.

Tissue accumulation of acylcarnitine metabolites is characteristic of mitochondrial dysfunction and indicative of incomplete β-oxidation. This occurs when a large portion of the fatty acids (i.e., acyl groups) within the mitochondria are not fully catabolized and the resulting intermediates are transferred to carnitine esters, enabling the traversal of biological membranes and departure from the mitochondrial matrix.

Nϵ-acetylation in the mitochondrial matrix is a non-enzymatic, post-translational modification (PTM) that spontaneously arises from the relatively basic pH and abundance of acetyl-CoA. Accumulation of this PTM has been observed in other tissues and disease states with evidence suggesting it impairs mitochondrial metabolism and causes dysfunction. However, convincing studies are lacking to establish a direct causal connection between dysfunction and acetylation. To address this shortcoming, a novel assay platform for the comprehensive assessment of mitochondrial bioenergetic transduction was developed and validated. Next, we generated and validated a novel mouse model of cardiac mitochondrial hyperacetylation and utilized the bioenergetic assay platform to test the hypothesis that it causes metabolic perturbations. Surprisingly, these hyperacetylated mitochondria exhibited almost no deficits in mitochondrial oxidative metabolism. To determine if hyperacetylation causes mitochondrial dysfunction in vivo under pathologic stimuli, the mouse model and littermate controls were subjected to transaortic constriction, a surgical method to induce pressure-overload heart failure. The hyperacetylated animals did not exhibit enhanced sensitivity toward cardiac dysfunction relative controls. With these results, we concluded that mitochondrial hyperacetylation does not contribute to the pathogenesis of heart failure.