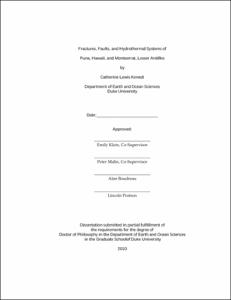 The focus of this work is to use geologic and geophysical methods to better understand the faults and fracture systems at Puna, in southeastern Hawaii, and southern Montserrat, in the Lesser Antilles. The particular interest is understanding and locating the deep fracture networks that are necessary for fluid circulation in hydrothermal systems. The dissertation first presents a study in which identification of large scale faulting places Montserrat into a tectonic context. Then follow studies of Puna and Montserrat that focus on faults and fractures of the deep hydrothermal systems.

The first chapter consists of the results of the SEA-CALIPSO experiment seismic reflection data, recorded on a 48 channel streamer with the active source as a 2600 in3 airgun. This chapter discusses volcaniclastic debris fans off the east coast of Montserrat and faults off the west coast. The work places Montserrat in a transtensional environment (influenced by oblique subduction) as well as in a complex local stress regime. One conclusion is that the stress regime is inconsistent with the larger arc due to the influence of local magmatism and stress.

The second chapter is a seismic study of the Puna hydrothermal system (PHS) along the Kilauea Lower East Rift Zone. The PHS occurs at a left step in the rift, where a fracture network has been formed between fault segments. It is a productive geothermal field, extracting steam and reinjecting cooled, condensed fluids. A network of eight borehole seismometers recorded >6000 earthquakes. Most of the earthquakes are very small (< M.2), and shallow (1-3 km depth), likely the result of hydrothermal fluid reinjection. Deeper earthquakes occur along the rift as well as along the south-dipping fault plane that originates from the rift zone.

Seismic methods applied to the PHS data set, after the initial recording, picking, and locating earthquakes, include a tomographic inversion of the P-wave first arrival data. This model indicates a high seismic velocity under the field that is thought to be an intrusion and the heat source of the hydrothermal system. A shear wave splitting study suggested the PHS fracture system is largely oriented rift-parallel with some orthogonal fractures. Shear wave splitting data also were used in a tomographic inversion for fracture density. The fracture density is high in the PHS, which indicates high permeability and potential for extensive fluid circulation. This has been confirmed by high fluid flow and energy generation. The high fracture density is consistent with the interpretation of a transfer zone between the rift segments where a fracture mesh would be expected. In Puna the transfer zone is a relay ramp.

The results from the PHS are used as an example to examine the proposed hydrothermal system at St. George's Hill, Montserrat. In southern Montserrat, hot springs and fumaroles suggest a deep hydrothermal system heated by local magmatism. A magnetotelluric study obtained resistivity data that suggest focused alteration under southeastern Montserrat that is likely to be along fault segments. Several faults intersect under SGH, making it the probable center of the hydrothermal system. At Puna, and also Krafla, Iceland, where faults interact is an area of increased permeability, acting as a model to be applied to southern Montserrat. The conclusion is that in both Puna and Montserrat large faults interact to produce local areas of stress transfer that lead to fracturing and permeable networks; these networks allow for high-temperature hydrothermal circulation.