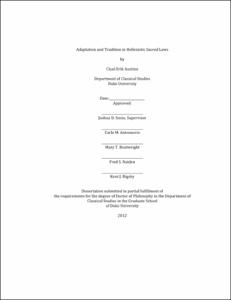 This dissertation examines the adaptability of civic cults during the Hellenistic period. Faced with shifting populations, increasing social tensions, economic changes, and political pressures, Hellenistic communities devised a number of strategies aimed at negotiating the tension between maintenance of traditional religious practices and adaptive, context-specific change. Through the lens of inscribed Greek sacred laws we see communities balancing the twin requirements of innovation and tradition. The epigraphic record shows significant changes to the choreography of religious experience in response to demographic change; experimentation in funding mechanisms, in what appear to be responses to economic and cultural changes; ambitious attempts to redefine the configuration of sacred space both inside the city and out; savvy rhetorical and ritual framing of innovation in the face of cults that had had failed or else were on the brink of doing so.

Through a series of case studies I elucidate the legislative strategies with which communities dealt with these challenges. In chapter 1, I investigate legal strategies aimed at maintaining traditional oracular procedures as more visitors were coming to iatromantic shrines. I focus on the shrine of Apollo Coropeius in Thessaly where the civic authority at Demetrias passed a law reevaluating the administrative and ritual procedures for consultation. In chapter 2, I analyze the changing obligations of sacred personnel to perform rites in the city at large, i.e. before festivals, in the face of shifting socioeconomic norms. Communities frequently experimented with alternative mechanisms to fund religious activities. A sacred law from Halicarnassus forms the backbone of this analysis. I argue that cultural pressures may have helped shape these mechanisms. Chapter 3 concerns legislative strategies for the reconfiguration of sacred space, particularly the moving or refactoring of sanctuaries. Here I analyze a third-century decree from Tanagra that regulates the transfer of a sanctuary of Demeter and Kore. Other laws, particularly from Anaphe and Peparethus, provide crucial details for the rearrangement of important cult structures. In these cases, we see the concerted efforts to provide for private and public and sacred and secular interests in order to ensure the perpetuation of traditional religious practices. The fourth chapter investigates the reinvention of cult caused by political and ideological interests. Communities employed rhetorical strategies to justify or mask the reinvention or renewal of traditional rites that had lapsed or were on the brink of doing so. I focus on two case studies that illustrate the complexities of legislating ritual reinvention. A second-century Athenian law details the rites for the revived Thargelia whereas a decree from Magnesia-on-the-Maeander details the expansion of the cult of Artemis Leukophryene with a new festival commemorating the goddess' new temple. In both cases, we can see rhetorical strategies of augmentation and renewal reflected in the writings of Anaximines of Lampsacus. The concluding chapter provides a view of the other side of the coin: what happens when communities fail to adapt to the challenges that threatened their cults? Polybius, Pausanias, and Plutarch shed much light on our most pressing questions. For instance, what did failed cults look like? How did Greeks envisage dilapidated sanctuaries and defunct cults? Overall, the case studies based on sacred laws present a Greek view of religious change that finds strength in change, continuity in adaptation, commonality in variation, stability in the shifting sands of historical change. The portrait of Greek religion that emerges from this study is one in which tradition and innovation form two sides of the same coin, rather than opposing forces