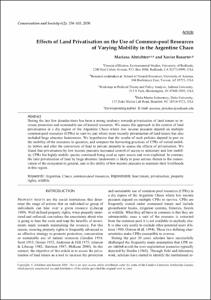 View / Download
303.3 Kb
Date
Authors
Altrichter, Mariana
Basurto, Xavier
Repository Usage Stats
214
views
319
downloads
Abstract
During the last few decades there has been a strong tendency towards privatisation of land tenure to increase protection and sustainable use of natural resources. We assess this approach in the context of land privatisation in a dry region of the Argentine Chaco where low income peasants depend on multiple common-pool resources (CPRs) to survive and where most recently privatisation of land tenure has also included large absentee landowners. We hypothesise that the results of such policies depend in part on the mobility of the resources in question, and compare the harvesting practices of CPRs of varied mobility before and after the conversion of land to private property to assess the effects of privatisation. We found that privatisation by low income peasants increased control of access to stationary and low mobility CPRs but highly mobile species continued being used as open access and over-exploited. In contrast, the later privatisation of land by large absentee landowners is likely to pose serious threats to the conservation of the ecosystem in general, and to the ability of low income peasants to maintain their livelihoods in this region.
Type
Journal article
Subject
Argentina
Chaco
common-pool resources
Impenetrable
land tenure
privatisation
property rights
wildlife.
Permalink
https://hdl.handle.net/10161/6423
Collections
More Info
Show full item record Associate Professor of Sustainability Science
I am interested in the fundamental question of how groups (human and non-human) can find ways to self-organize, cooperate, and engage in successful collective action for the benefit of the common good. To do this I strive to understand how the institutions (formal and informal rules and norms) that govern social behavior, interplay with biophysical variables to shape social-ecological systems. What kind of institutions are better able to govern complex-adaptive systems? and how can societies (la