Fate of products of degradation processes: consequences for climatic change. 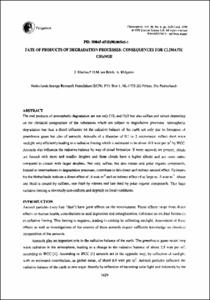 View / Download
744.3 Kb
Date
Authors
Slanina, J
ten Brink, HM
Khlystov, A
Repository Usage Stats
173
views
206
downloads
Abstract
The end products of atmospheric degradation are not only CO2 and H2O but also sulfate and nitrate depending on the chemical composition of the substances which are subject to degradation processes. Atmospheric degradation has thus a direct influence on the radiative balance of the earth not only due to formation of greenhouse gases but also of aerosols. Aerosols of a diameter of 0.1 to 2 micrometer, reflect short wave sunlight very efficiently leading to a radiative forcing which is estimated to be about -0.8 watt per m2 by IPCC. Aerosols also influence the radiative balance by way of cloud formation. If more aerosols are present, clouds are formed with more and smaller droplets and these clouds have a higher albedo and are more stable compared to clouds with larger droplets. Not only sulfate, but also nitrate and polar organic compounds, formed as intermediates in degradation processes, contribute to this direct and indirect aerosol effect. Estimates for the Netherlands indicate a direct effect of -4 watt m-2 and an indirect effect of as large as -5 watt m-2. About one third is caused by sulfates, one third by nitrates and last third by polar organic compounds. This large radiative forcing is obviously non-uniform and depends on local conditions.
Type
Journal article
Subject
Aerosols
Air Pollutants
Animals
Atmosphere
Biodegradation, Environmental
Climate
Humans
Nitrates
Sulfates
Permalink
https://hdl.handle.net/10161/6544
Collections
More Info
Show full item record