The Neurobiological Foundations of Altruism 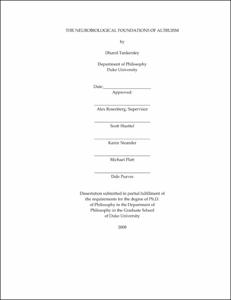 Chapter 2 describes dominant theories of motivation and the neurobiological and psychological mechanisms that support motivated behavior. Although the evidence is not conclusive, I argue that our best scientific models and neurobiological evidence support affective models of psychological altruism, and that other models are at best incomplete and possibly implausible in light of neurobiological considerations.

Chapter 3 introduces mind reading approaches to altruism, which argue that the capacity for altruistic motivations depends upon the capacity to represent the psychological states or circumstances of others. I conclude that altruism requires at a minimum the ability to attribute affective experiences to others. Further, I argue that the representations produced by mind reading processes provide a means for distinguishing between self-regarding and altruistic motivations. In contrast with the dominant philosophical theory of psychological altruism, the mind reading model I propose is compatible with the affective theory of motivation depicted in Chapter 2. My own empirical work is described as an example of how neurobiological techniques can reveal the differential role of neural systems in producing self-regarding and altruistic behavior.

Chapter 4 departs from the mechanistic approach to altruism discussed in the previous chapters, and presents an overview of how the fields of philosophy, psychology, psychobiology and genetics, have investigated altruism as a stable characteristic or personality trait. Recent technological advances make this a promising approach for investigating the psychological and neurobiological systems supporting altruistic behavior.