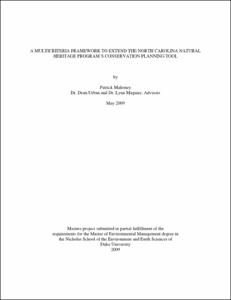 View / Download
5.8 Mb
Date
Author
Mahoney, Patrick
Advisors
Urban, Dean
Maguire, Lynn
Repository Usage Stats
286
views
283
downloads
Abstract
The protection of natural communities is essential to preserving biodiversity and wildlife habitat across an increasingly developed and fragmented landscape. The North Carolina Natural Heritage Program has produced a scoring of sites across the state using a geospatial tool that ranks sites based upon their importance to biodiversity and wildlife habitat. This scoring uses mostly datasets related to the presence of rare and threatened species. The tool developed in this study extends the rankings produced by the Natural Heritage Program to include other attributes of biodiversity and wildlife habitat, including site context, geometry and variety of abiotic conditions. Dataset measures of these attributes were developed and built into a geospatial tool that produces a ranking of sites. This enables the identification of areas of conservation value that are not well represented in the Natural Heritage Program’s current model. The geospatial datasets used as inputs for the model are structured using multi-attribute utility theory, allowing users to assign utility values to datasets and manipulate the weights received by each dataset in the final scoring. This allows decision-makers to incorporate their own opinions about what contributes to biodiversity value in the ranking of sites, and is transparent in the choices that they have made. This produces a ranking of sites that is representative of a variety of attributes of biodiversity value and explicitly demonstrates the user-specific decisions that were made in its production. This type of ranking is not meant to replace the professional opinions of decision-makers, but can help to guide inquiries into the conservation value of a site where data does not exist on rare and threatened species and help to compare sites that possess similar levels of known biodiversity.
Type
Master's project
Department
Nicholas School of the Environment and Earth Sciences
Subject
conservation priorities
multicriteria decision problem
multi-attribute utility theory
North Carolina
biodiversity indicators
contextual indicators
abiotic surrogates
Permalink
https://hdl.handle.net/10161/974
Citation
Mahoney, Patrick (2009). A MULTICRITERIA FRAMEWORK TO EXTEND THE NORTH CAROLINA NATURAL HERITAGE PROGRAM’S CONSERVATION PLANNING TOOL. Master's project, Duke University. Retrieved from https://hdl.handle.net/10161/974.
Collections
More Info
Show full item record