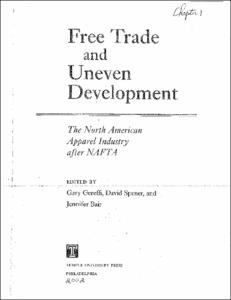 View / Download
1.7 Mb
Date
Authors
Spener, D
Gereffi, G
Bair, J
Repository Usage Stats
151
views
164
downloads
Abstract
The economic and social consequences of international trade agreements have become a major area of inquiry in development studies in recent years. As evidenced by the energetic protests surrounding the Seattle meeting of the World Trade Organization (WTO) in December 1999 and the controversy about China's admission to the WTO, such agreements have also become a focus of political conflict in both the developed and developing countries. At issue are questions of job gains and job losses in different regions, prices paid by consumers, acceptable standards for wages and working conditions in transnational manufacturing industries, and the quality of the environment. All these concerns have arisen with regard to the North American Free Trade Agreement (NAFTA) and can be addressed through an examination of changes in the dynamics of the apparel industry in the post-NAFTA period.1 In this book, we examine the evolution of the apparel industry in North America in order to address some of these questions as they pertain to North America, with an eye toward the broader implications of our findings. We also consider the countries of the Caribbean Basin and Central America, whose textile and apparel goods are now allowed to enter the U.S. market on the same basis as those from Canada and Mexico (Odessey 2000). © 2009 by Temple University Press. All rights reserved.
Type
Book section
Permalink
https://hdl.handle.net/10161/11444
Collections
More Info
Show full item record