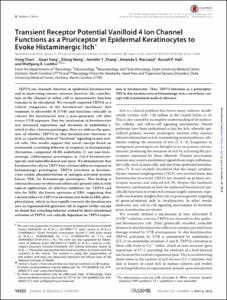 J. Lamar Callaway Distinguished Professor of Dermatology, in the School of Medicine
Our laboratory is investigating the pathogenesis of autoimmune blistering skin diseases. Areas of special expertise include immune mediated skin diseases, especially immune mediated primary blistering disorders. These include pathogenesis, diagnosis, and management. Specifically our laboratory is investigating the role of the mucosal immune response in the pathogenesis of dermatitis herpetiformis (DH) and the role the associated gluten sensitive enteropathy (GSE) plays in the development o Adjunct Associate Professor in the Department of Dermatology
The MacLeod Lab investigates the dynamic regulation of innate immunity, with specific focus on host-microbial interactions, antimicrobial host defense, antiviral proteins, and repair functions. Skin is an active immune organ and comprises not only epithelial keratinocytes, but also harbors dendritic cells, macrophages, nerve cells, and other immune cells. Furthermore, the skin is inhabited by a multitude of microbes, including bacteria, viruses and fungi and even parasites. The health Professor in Dermatology
Epidermis of the skin constitutes the largest organ and the outer most barrier of the body. It is one of the few organs that undergo lifelong self-renewal through a tight balance of cell growth, differentiation, and programmed cell death. Deregulation of this balance is manifested in many diseases, including various immune diseases and cancer.  Our lab is focused on 3 interrelated topics: 1. Gene regulation of epithelial cell proliferation and differenti
More Authors
Alphabetical list of authors with Scholars@Duke profiles.