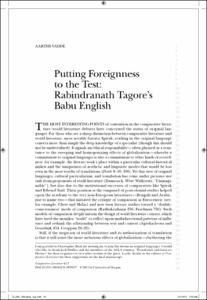 View / Download
239.2 Kb
Date
Author
Vadde, A
Repository Usage Stats
107
views
123
downloads
Abstract
This article contributes to the forum on original languages by examining debates about reading in translation in comparative literature studies. Traditionally comparative literature has eschewed the study of works in translation, but new interventions in world literature challenge this long held piety. I argue that reading in translation can be a valuable practice for scholars of English and comparative literature alike because it demands that we reconsider the link between the commitment to original languages and the promotion of theories of culture that prize alterity and difference over encounter and intersection. I further suggest that the preference for foreignness and defamiliarization as critical strategies of translation and reading limits the kinds of literary works that constitute postcolonial and world literature canons, particularly in the English language. To illustrate these claims, this essay turns to the career of Rabindranath Tagore, whose auto-translations of many works, including Gitanjali and The Home and the World, render him a bilingual writer of Bengali and English literature. By close reading Tagore's translations and their receptions among early Orientalist and late-twentieth-century critics, I show that his under-appreciated translations are key to understanding the development of his style across both languages. Even more importantly, the reception of his translations as awkward and old-fashioned, or what I call "Babu English," reveals continuities between Orientalist and postcolonial approaches to the elevation of cultural difference. Tagore's Babu English refers to his uncanny English translations, which are neither fully assimilated to the target language nor assertively foreignized. Their partial domestication shows up the exoticism desired by Orientalist readers and equally challenges the notion of complicity assigned to domesticated translations by contemporary critics. © 2013 by University of Oregon.
Type
Journal article
Permalink
https://hdl.handle.net/10161/18116
Published Version (Please cite this version)
10.1215/00104124-2019257
Publication Info
Vadde, A (2013). Putting foreignness to the test: Rabindranath Tagore's Babu English. Comparative Literature, 65(1). pp. 15-25. 10.1215/00104124-2019257. Retrieved from https://hdl.handle.net/10161/18116.
This is constructed from limited available data and may be imprecise. To cite this article, please review & use the official citation provided by the journal.
Collections
More Info
Show full item record Associate Professor of English
Aarthi Vadde works in the field of 20th-21st century Anglophone literature.  She looks at how literary history interfaces with theories of internationalism, the history of computation, and media studies more generally.  She is the co-host of Novel Dialogue a podcast about how novels are made - and what to make of them. In 2021 she joined the editorial board of the Norton Anthology of English Literature and is co-editing Vol.F: The Twentieth and