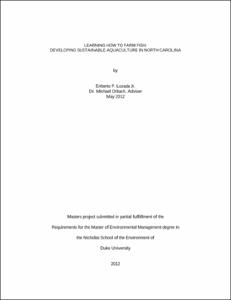 View / Download
1.0 Mb
Date
Author
Lozada, Eriberto P. Jr.
Advisor
Orbach, Michael
Repository Usage Stats
440
views
937
downloads
Abstract
As the world’s population grows, there are greater demands placed on the natural environment to feed people – people whose dietary expectations have changed with globalization and a greater awareness of how other people live. With this increase in the consumption of animal protein, aquaculture has been portrayed as the latest technological panacea to save the environment, promote economic development, and strengthen food security. Aquaculture has also been vilified as depriving fishers of their way of life and causing damage to the marine and coastal environment. In the United States, while there are a number of structural impediments (especially a confusing array of regulatory bodies at the federal level), there are also social and state supports that allow for the development of aquaculture as a sustainable alternative to capture fisheries. Based on participant-observation fieldwork on North Carolina fish farmers in 2011-2012, this project will examine how elements in the culture of aquaculture can develop sustainable fish farming. Problems in the sustainability of aquaculture have been traced to: a tight coupling to ecosystems and dependence on common-pool resources; poor farm management; weak governance, especially over the environment and market; and a lack of knowledge flow (scientific, technological, and economic) among farmers and between farmers, state agents, and consumers. Because the bulk of NC aquaculture is freshwater or in recirculating aquaculture systems, small-scale, and producing products largely for a niche market (for live fish or lesser-known species such as prawn), fish farmers and the state government in North Carolina are largely able to rely on information-based environmental governance to develop sustainable aquaculture enterprises. The connections between fish farmers, researchers, and state agents, as seen in the emergence of new aquaculture cooperatives, provide support for the development of sustainable practices, especially as new aquaculturalists learn how to farm fish
Type
Master's project
Department
Nicholas School of the Environment and Earth Sciences
Subject
aquaculture
North Carolina
sustainability
Permalink
https://hdl.handle.net/10161/5167
Citation
Lozada, Eriberto P. Jr. (2012). Learning How to Farm Fish: Developing Sustainable Aquaculture in North Carolina. Master's project, Duke University. Retrieved from https://hdl.handle.net/10161/5167.
Collections
More Info
Show full item record