BOLD signal compartmentalization based on the apparent diffusion coefficient. 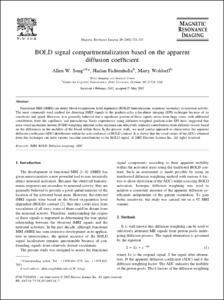 View / Download
362.5 Kb
Date
Authors
Song, Allen W
Fichtenholtz, Harlan
Woldorff, Marty
Repository Usage Stats
198
views
185
downloads
Abstract
Functional MRI (fMRI) can detect blood oxygenation level dependent (BOLD) hemodynamic responses secondary to neuronal activity. The most commonly used method for detecting fMRI signals is the gradient-echo echo-planar imaging (EPI) technique because of its sensitivity and speed. However, it is generally believed that a significant portion of these signals arises from large veins, with additional contribution from the capillaries and parenchyma. Early experiments using diffusion-weighted gradient-echo EPI have suggested that intra-voxel incoherent motion (IVIM) weighting inherent in the sequence can selectively attenuate contributions from different vessels based on the differences in the mobility of the blood within them. In the present study, we used similar approach to characterize the apparent diffusion coefficient (ADC) distribution within the activated areas of BOLD contrast. It is shown that the voxel values of the ADCs obtained from this technique can infer various vascular contributions to the BOLD signal.
Type
Journal article
Subject
Algorithms
Brain
Diffusion Magnetic Resonance Imaging
Hemodynamics
Humans
Motor Cortex
Oxygen
Regression Analysis
Permalink
https://hdl.handle.net/10161/6935
Collections
More Info
Show full item record Professor in Radiology
The research in our lab is concerned with advancing structural and functional MRI methodologies (e.g. fast and high-resolution imaging techniques) for human brain imaging. We also aim to improve our understanding of functional brain signals, including spatiotemporal characterizations of the blood oxygenation level dependent contrast and alternative contrast mechanisms that are more directly linked to the neuronal activities. Additional effort is invested in applying and validating the de